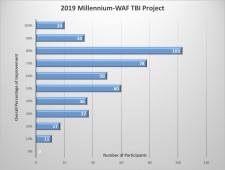 The TBI HELP NOW website was launched to increase the public's awareness and understanding of what constitutes a traumatic brain injury (TBI). We now know that many minor bodily injuries can accumulate to create the same symptoms as those precipitated by one major head injury. Over 10 million people are walking the streets of our nation with changes in personality seen as psychiatric illnesses, as well as, loss of memory and cognitive decline. They are, unfortunately, at high risk for suicidal behavior. For TBI there is Help Now!

At this website, Dr. Gordon offers the science behind the development of tools used for assessing individuals with traumas that precipitate mood and personality disorders, and also offers a treatment solution. The solution is based upon returning the brain’s hormones (neurosteroids) to their optimal levels while diminishing the inflammation (neuroinflammation) that is at the root cause of the problem and not a deficiency of SSRIs.

Starting in 2004 and continuing to the present, Dr. Gordon has been working within the veteran and active military communities, with active and retired sports professionals, and of course the immense civilian population all suffering from undefined symptomatic TBIs.

Using old tools in a new way, he has applied a paradigm shift in the interpretation of 30 key, common laboratory tests comprising the Millennium Biomarker panel. The results are used to generate a personalized treatment program consisting of both naturopathic and allopathic medicines. The program’s success rate is over 75% within 12 months.

Mr. Andrew Marr and Mr. Adam Marr, both Veterans and founders of the Warrior Angels Foundation(501(3c)), have worked together with the Millennium-TBI Project since 2014, to provide awareness, support, and our personalized program to the service communities. Their book – Tales from the Blast Factor, has been the foundation for a full-feature documentary – Quiet Explosions, to be released in 2020.

The Millennium Health Centers, Inc. is in need of another 500 providers to get trained and certified as an independent network facility. Only working as a team can we get a chance to change the present paradigm and save more lives.