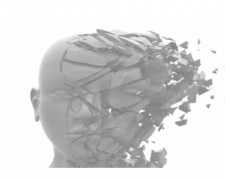 As defined by the DoD/VA, a mild TBI can be: any period of loss of consciousness; any loss of memory for events immediately before or after the accident; any alteration in mental state at the time of the accident (e.g., feeling dazed, disoriented, or confused); and any focal neurological deficit (weakness, movement disorders, sensory symptoms and blackouts) that may or may not be transient, but where the severity of the injury does not exceed the following: A) loss of consciousness of approximately 30 minutes or less; B) after 30 minutes, an initial Glasgow Coma Scale of 13-15; and C) post-traumatic amnesia not greater than 24 hours.

“The main issue here is that we are looking for one single, major, qualifying traumatic brain injury that follows these criteria while disregarding any injuries that are less traumatic and possibly ‘non-traumatic,’” explains Dr. Mark Gordon, “However, these ‘non-traumatic’ injuries represent the majority of symptomatic cases that develop over time; our present medical wisdom classifies them as psychiatric in nature.”

Overt physical traumas such as blunt head/face trauma, motor vehicle accident, slip and fall, bicycle accident, roller-skates or skateboarding accidents can be minor or mild forms of head trauma while the non-physical traumas can be stress, blast wave trauma, medication, drugs, alcohol, surgery, immunizations, or even chemotherapy.

“Over our lifetime, we are exposed to many apparently inconsequential physical and non-physical traumas, which in many instances can precipitate future symptoms,” remarks Dr. Gordon.

Regardless, in time, the accumulative effects of any one of these physical and/or non-physical traumas can create within the brain the underlying inflammatory environment that produces symptoms. Unfortunately, the association between these traumas and symptoms are lost due to perceived insignificance of a trauma that does not cause any of the elements put forth by the current definition of traumatic brain injury. The common solution for this scenario has always been polypharmacy.

“Using the science of Neuroendocrinology, we assess the brain’s hormones (neurosteroids) and those produced by the body (neuroactive steroids) as reflections of our brain’s health, since after trauma these can be greatly affected,” explains Dr. Gordon.

On occasion, a patient will sense a change in their moods, energy level, and even libido and seek out a medical assessment. Many times, they denied ever having had a traumatic or non-traumatic event in their life. Nonetheless, the Millennium-TBI Biomarker panel tells a more accurate story.

One client at 18 years of age was T-boned in his car, causing his head to snap and shatter the driver’s-side window. He denied loss of consciousness, confusion, or amnesia. Years later, at age 41, he developed mood swings, anger, loss of focus and libido. His visit to a local Male Clinic found testosterone deficiency and a low luteinizing hormone (LH) level. What this means is that the brain (pituitary gland) was not producing LH to stimulate the testes to make testosterone. This is a clear indication of a hormonal dysfunction syndrome arising out of his head trauma at age 18. The standardized TBI assessment criteria would have ignored his trauma as being insignificant.

In the case of JC, an Army Medic, for protection he would walk behind an Abrams tank feeling the effects of the blast wave each time the tank discharged a round. About 18 months after his discharge from the Army, he developed treatment-resistant depression and was on a number of medications. At the time of assessment, his 28-year-old body had a testosterone level of an 80-year-old, with both LH and Testosterone being low. In both cases, the biomarker panels suggested damage to the brain as the cause, and both had normal CT and MRI scans.

Once on a treatment protocol to address the deficiencies and inflammation, they both regained their quality of life.

In the past 16 years of assessing traumatic and non-traumatic brain injuries, psychiatric illnesses were common presenting complaints. In the past few decades, the medical literature has now clearly associated traumatic and non-traumatic brain injuries with the onset of inflammation that appears to be the core precipitating factor to neuropsychiatric illnesses. It appears that this inflammation alters the healthy chemistry of the brain, which affects the neurocircuitry that regulates mood, personality, cognition, sleep, heart rate, temperature, blood pressure, headaches, and bodily functions.

Read some of the science at: https://tbihelpnow.org/the-science

Dr. Mark L. Gordon is the founder and medical director of Millennium Health Centers, Inc. in Encino, California. In 2015, Dr. Gordon released the book, "Traumatic Brain Injury - A Clinical Approach to Diagnosis and Treatment" that presents the science and his experience treating all precipitating causes of traumatic brain injury in both active military, veteran, sports, and civilian populations. Dr. Gordon has also joined with the Warrior Angels Foundation, a 501(c)(3) charitable organization founded by veterans Andrew and Adam Marr to provide services to members of the armed forces both active and veterans. For more information, visit TBIHelpNow.org.